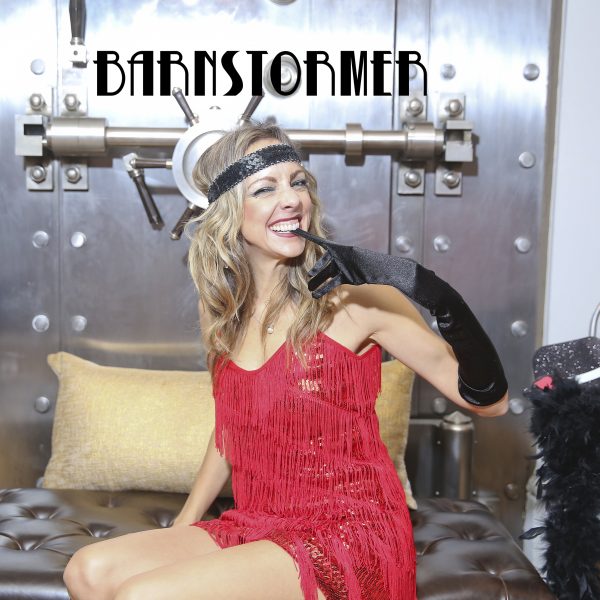 This collection of songs was going to be released on JULY 17th, 2020. But there was glitch, and therefore a delay. The good thing is that this music can’t get old, because it is already 100 years old. So, let’s celebrate the 1920’s for the next 20 years together! It’s available now, Nov 13, 2020, on all digital download platforms!

How the album was recorded

Barnstormer’s debut album ‘Take one’ was recorded in combination of both LIVE & STUDIO scenarios. In February of 2020 a live show as captured in Vancouver and those recordings became half of this album. Though an album was not in the bands plan at that time, it was ‘just a gig’! As soon as Melanie heard the recordings, she wanted to do it again, but Covid put a halt on live performance opportunities.

So instead, an additional 6 songs were recorded in the months that followed. Now, because the band couldn’t come together in one room and couldn’t perform live, Mela made a new plan. That’s when recording of a different kind began. Drums & vocals were recorded simultaneously, with a door and glass in between, so we could be Covidly sound and safe (it’s a good thing we have good headphones!). The boys recorded at home and then these parts were carefully assembled later.

We wanted a live, everyone-in-the-room-at-once sound. We wanted to keep authenticity, be our musical colourful selves while improving upon the overall recording quality from 1920’s recordings.  With the combined direction of the producers, we worked to capture an era, and we had a blast doing it! Producer/Engineer: Allan Rodger at Crosstown Studio, Vancouver, BC. Executive Producer: Melanie Dekker

The Singer in the band

I was hired to sing at Gatsby themed party a few years back and that’s when I started to get super fascinated with the era. I was dumbfounded that I had no idea what I would sing, nor what any 1920’s hit songs were.  Then I immersed myself in the variety of music, the matter-of-fact and in your face humour, the sassy language, the dance craze, and the not so pretty politics. I read about the empowering women of the time, the fashion industry, gangsters, musicians and artists. And well, out came this character you hear on the album.

The Sockdollagers in the band

Tom Keenlyside is a woodwind pro. To elaborate, he’s performed and recorded with a variety of international artists including Natalie Cole, Aerosmith, Mel Torme, Van Halen, Diana Krall, and the Vancouver Symphony Orchestra. Then prophetically earned a star on the BC Entertainment Hall Of Fame Walk. As Babe would say, “Every strike brings me closer to the next home run.”

AL CAPONE – Famed for his gangster & business style during the prohibition, which landed him a jail sentence in Alcatraz. DRUMS.

Allan Rodger, is a studio engineer, a record producer and fiery multi-instrumentalist. He focuses on keeping it real. While being simultaneously inspired by his Mother’s lovely voice & Stevie Wonder records, he built his first drum-kit at 9 years old & already had his first gigs as a pre-teen. Capone would say, “Once in the racket you’re always in it.”

Eric Reed, is a multi-instrumentalist & studio engineer whose talents have accumulated awards such as a Juno nomination, a Canadian Folk Music award, & a Gaylord Woods traditional roots-country award. Although, he is mostly influenced by Jimi Hendrix & Ry Cooder. Eric’s often on the move in the mountains. As Einstein would say, “Life is like riding a bicycle. To keep your balance you must keep moving.”

Jeremy Holmes has an impressive jazz degree and a young family, so every year he jams in 100’s of studio days and 100’s of live shows. While he only met Mela a short while ago during the Secret Spot recordings in Vancouver, his precision and likability are no secret. His fabulous list of projects is a script too long for this occasion. As Dali would say, “Intelligence without ambition is a bird without wings.”

You don’t need a DJ for your Gatsby party. Instead, experience the 1920’s prohibition and dance craze era with a band who will take you there. A Barnstormer Band experience is when everyone leaves you smiling! We’ve combined world class musicianship, studious natures, and charming style to bring you 100 year old music that rocks!

You can have an exceptional virtual 1st class concert at your special event, and we will make it easy!
To book now, contact: elephantearsentertainment@gmail.com