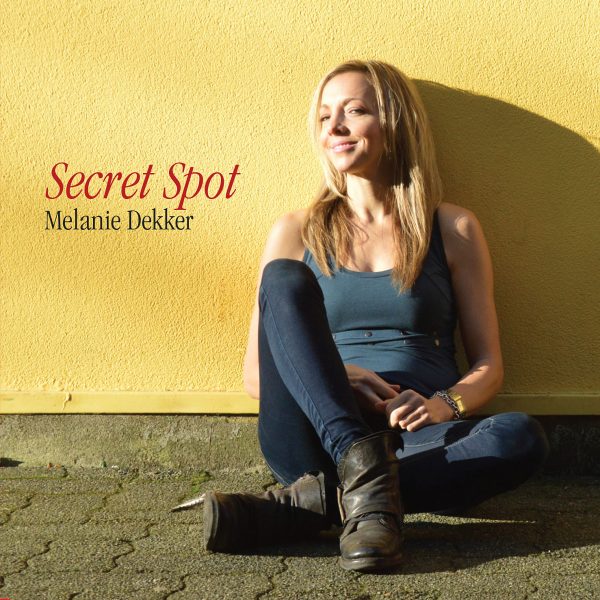 This album “SECRET SPOT” is available for you on iTunes, Spotify, & Melanie’s albums here in her website store.

This is a spirited and dynamic Melanie Dekker album, recorded with award-winning Canadian producer Sheldon Zaharko, and supported by Creative BC and the Government of British Columbia.

The grant allowed this project to flourish, in that the players we wanted could be hired, I could work with a now award winning engineer/producer, Sheldon Zaharko, and we could work in the studios that felt the best. Of note, “Front Row” got special treatment as it was recored in The Warehouse Studio, and it turned out to be the last time I would record with my long-time touring partner, the late David Sinclair.

A collection of 10 songs that will take you to a few special corners of your heart. There is depth & variety, and the more you listen the sweeter the details get. The pace is somewhat like walking through a city on a sunny day where the wind is howling and seems to chase you, as its strength differs with every turn you make.  “This folk-pop record was mostly influenced by the last 100 shows, journeys experienced with my family & dearest friends over the last 5 years, and paying attention to the ‘quiver’ you get when something makes the hair on your arms stand up.  The music I listened to these past few years (‘City & Colour’, ‘Tom Petty’, ‘The Band’, ‘John Mayer’, ‘Ed Sheeran’) and inevitably some heartbreak also played a part.”

Keith Scott (Bryan Adam’s guitar player) offered an exciting addition to campfire kitchen party feel of “Te Amo Mucho”, and and the moving E-Bow part in “Memories of You”. “Te Amo Mucho” was a song I wrote within about an hour as I was recalling the scene of watching my Dad watching sing along to the Vaqueros in Baja, Mexico only a few weeks earlier. And “Memories of You” was a song I had written about my own love heartbreak, whereby the intensity amplified as it got melded the heartbreak of a different kind – my tennis buddy, had been murdered by his own brother. Images seemed to get stronger the more I played them over in my head, though I didn’t focus on the sorrow. Rather I focused on the images I missed and held dear most.

The backbone of most of the tracks are my acoustic guitar, and then I coloured the songs with my favourite musicians and instruments. I also dared to use my fingers on the piano track on ‘Always Gonna Be’, gently strummed the Ukulele on ‘More Human’, got funky with the Wurlitzer piano on ‘Better when we do’, and gently hammered it all home on a Rhodes Piano on ‘When it’s over’ – the final and most gentle track.

This album and more is available for you on iTunes, Spotify, & Melanie’s albums here inside her website store.

Let’s buy tickets on an airplane baby
Get loosey-goosey all around
Travel in style, play a little crazy
Turn never into now

We keep waiting on someday
Some say – someday never comes
Well, she showed up while I was sleeping
Waking me – to the beat of my own drum

It’s not all about the money
Honey, don’t let it get ya down

I want to take it back
Undo what’s been done
Never have I felt
More human, more human

He carried a torch for Diane
Though he never called her by her name
Just called her: “Baby, Darlin’, Sugar, Sweet-ie”
His sunshine, when it rained

She’d get ginned up & extra pretty
Home for lunch, ya he’d be
He said I dig it when you’re beside me

Ginned up & extra pretty
She like to sing for their three babies
She was fly, she could’ve gone pro
All her dreams were all about living now
and watching their babies grow

The youngest heard his mother’s name
At nine years old
The day he heard the neighbour call
Is Diane home
The smile on Gary’s face
that could’ve said it all
“That’s your Mom son,
she’s my sugar baby darlin’ sweetie”

Legend has it, you can put your troubles in
To a basket you then send floating
Down a river down the trouble goes
They’re gone now to where nobody knows

That’s what Mama told me
So in this way, is how I’ve been livin’
Good, bad & the ugly have a shoot out
Somewhere, sometime each one goes down
Your best bet, is keep your head high
And your feet on the ground

After – someone hurts you,
a lesson’s learned
Despite – good intentions, we all get burned
Chasing love, is like watching the sun
melt away sweet sugar

There’s always gonna be
Somebody faster smarter prettier
That won’t stop me (no no)
I’ll find a way with what I’ve been given
That’s what mama told me
And in this way, is how I’ve been livin’

I never heard my Dad sing, but he sure likes to play music loud
Likes to dance up a storm, the polite guy in a crowd
As a young boy at school, he was told not to open his mouth
By a daft music teacher who did not like his sound

His campfire stories reveal a tough & intelligent man
‘Letting go’ is not his strong suit, and such things you can not plan

Well, I was there when the cowboys of Baja played his favourite song
He looked like a young man again, as if no-one had ever done him wrong
Te Amo Mucho, I’ll be damned, he sang along

And as the moon shone over the devine Sierra hills
It told us to love everything, and sent us a feel good chill

Follow
I’ll take you to my secret spot
And I will show
All the precious things I’ve got
Follow…whistle, Follow…whistle.

At the edge of town
Cut across the tracks
Thru the fields, Thru the woods
Thru the trees
Take the trail to the cliff
To the end of the beach
Where stars hang down in reach

It’s across this bridge
To the end of the ridge
Where the sky, Meets the sea
Meets the sand
Where the moon beams bright
On a star filled night
I know you’ll understand

Better when we do

9. Better When We Do

Wouldn’t it be cool, to never fake
‘Cause we think reality’s not great
Wouldn’t it be freedom just to say
I love you, every time you feel that way

Wouldn’t it be wise to break it down
Un-complicate your emotions
Isn’t it a lift when you’ve found
A way to see the other, way ’round

Playin’ the fool
While keeping it cool

When it’s over, you just know
Look over your shoulder, as you let go
Of the highest highs and the lowest lows

Looking for words, turns out
that none of them matter
The pain, the love, turns out
cannot be measured

You break down, you break free
As heartache shatters thee
To re-live the scenes, only
keeps them familiar
To take them apart, only
serves as a slow killer

We catch on, we move on
We feel weak, while we stay strong

When it’s over
That’s when you start over